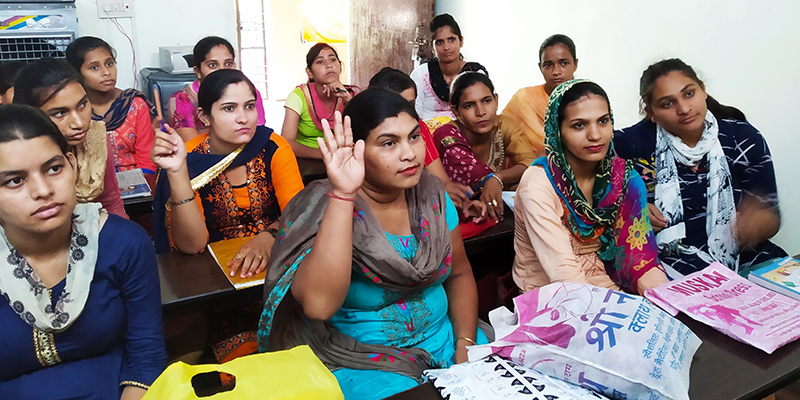 According to reports by the United Nations, women in India represent 29 percent of the country’s labor force. However, more than half of the work done by female workers is unpaid, informal and unprotected. Similarly, though women comprise almost 40 percent of agricultural labor, they control only 9 percent of land in India. They have little access to formal financial systems and nearly half of the country’s women do not own a bank or savings account. As a result, India has a lower share of women’s contribution to the GDP than the global average of 37 percent. (Source:https://in.one.un.org/unibf/gender-equality/)

Hence, inclusive economic growth is extremely crucial to gender equality. In order to achieve this, we must actively work towards encouraging entrepreneurship and skill development.

Held in the Naultha and Mandi villages of Panipat District, Haryana, each session began with an open discussion on the importance of Financial Independence. There was an overwhelming response from every batch wherein many of the women presented their individual ideas on the matter of independence. While their opinions varied, everything came down to the point that making one’s own decisions is the first step towards empowerment and in order to do that, one must be financially secure besides being aware and informed.

With the realization that one needs to be financially independent, comes the responsibility of being fair to one’s potential. The women at the sessions had been attending the tailoring course offered by Kreate for over six months and had garnered ample knowledge on the craft. However, only an average of 9 out of 50 women in every batch were actively tailoring for customers. Many of them also showed some reluctance with regard to starting their own business. This was primarily due to time constraints and their responsibilities towards the household.

Taking their challenges into consideration, our team explained how starting a business from home was a viable option and the investment would be quite small. On the other hand, the profits would be much higher and the only price would be their honest work, dedication, time and expertise.

There were excited murmurs as some of the women raised further questions regarding the matter. It became apparent that many of them were, indeed, looking forward to having their own business at some point despite the apprehensions.

In this day and age, hardly any business can get around without being heard or seen. Each batch at the sessions was introduced to the importance of marketing one’s business. No matter how big or small, one’s enterprise can thrive only by getting the word around. The women were introduced to digital platforms such as Facebook, Justdial and Google Business which cater to local businesses. It was delightful to see that many of them were already familiar with the effectivity of outdoor advertising tools such as pamphlets, flyers and billboards. Moreover, a video featuring the success story of a 45-year old woman’s tailoring venture had appealed to them. The constructive discussion which followed made it obvious that the women had drawn much inspiration from the story.

What did we learn?

We need to let go of the assumption that local are losing their market-share in the economy’s move towards e-commerce and digitization. On the contrary, it is within our capacity to inform them that popular e-commerce giants depend on manual skills and expertise.

The clothes that we wear and the cuts that we admire, result from hours of hard work and honest labor. As regular consumers of mass productions, we are also charmed by the exclusiveness of tailored hand-made items. Hence, digital platforms can be utilized to endorse and celebrate the art of tailoring and other traditional crafts.

We hope that our effort to raise awareness amongst the women of Naultha and Mandi will bear fruit. While it might be a small step towards cultivating the spirit of entrepreneurship and self-reliance, the ripple of change could be enormous if even a single one of them sets an example for her community.